“Frontal lobotomy has probably been the only medical advance which was first awarded a Nobel prize in medicine and then irreparably stigmatized by scientific rejection and public criticism.” http://www.ncbi.nlm.nih.gov/pubmed/17691325

Almost everything broken can be glued back together. Lobotomy has not been “irreparably” stigmatized. Au contraire, it’s on the rise, the second-coming of Dr. Freeman.

SETTING UP THE OPERATING TABLE

There were only five new psychiatric diagnoses added to the new DSM-5 this year. This is one of them, with its first (and more important) classified ‘symptom’:

1. Concerns of the patient, a knowledgeable informant or the clinician that there has been a mild decline in cognitive function.

This is a ‘disorder’ that manifests as a “concern”, mind you. Its effects may be felt by a person other than you: an “informant” may be the one suffering the disorder if he or she is “concerned” that you are acting mildly different. You can then be diagnosed as having a frontotemporal problem.

Kidding aside, this new diagnosis is not there innocently, inoffensively. Its inclusion in the DSM-5 has been carefully planned for the last 10 years by Thomas Insel and the NIMH, among the many people with interests in the lucrative field of neuropsychiatry research.

Its inclusion in the DSM-5 has two purposes, as I will discuss in the next post: reintroducing you to a procedure that had been historically discredited and to get you into accepting it under its new clothing – the psychobabble of the pseudo-science of neuropsychiatry.

ALL FORMS OF LOBOTOMY ARE BRAIN DAMAGE.

In the treatment of psychiatric disorders, modern lesion procedures…offer a degree of hope for patients who remain severely ill and impaired despite pharmacological and behavioral treatments. http://www.ncbi.nlm.nih.gov/pubmed/19551602 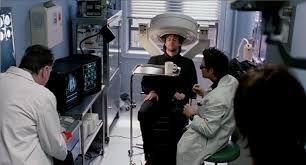 Joel: Is there any risk of brain damage?
Howard: Well, technically speaking, the operation is brain damage, but it’s on a par with a night of heavy drinking. Nothing you’ll miss.
From Eternal Sunshine of the Spotless Mind

Lobotomy has been discredited for a long time; it exists in our collective memory in any variety of the following pictures:

People have wrongly believed that this practice was stopped after the anti-psychiatric movement of the 1960s denounced the real nature of the practice and the use of humans to test the procedure. Unbeknown to most people, it has continued to be practiced, quietly, less frequently indeed, until the last 15 years when

“Recently, there has been a renaissance of interest in the surgical treatment of psychiatric disease.”

“Renaissance”, “interest”, “support” and positive “outcomes”, these words tell you that the future of psychiatric brain operations is now; that they have worked on this for a while and now is the time to let it roll out, again.

WHEN IS THE NEW LOBOTOMY PRESCRIBED?

As flood insurance companies do, the new lobotomy is prescribed when the unwary is most desperate for help.

This is the new psychiatric “it” word:  refractory. It means ‘unruly, resistant to treatment’ as in “impaired despite pharmacological and behavioral treatments”. It’s the term now used to justify the new lobotomy, for example, “evaluating both the efficacy and the safety of anterior capsulotomy for the treatment of severe, refractory OCD.” It sounds more mysterious and impressive to say refractory than saying ‘medication doesn’t make a dent on it’; you don’t want to hurt the pharma, do you?

That’s one of the repairs, for its public image, of the practice of lobotomy: now you have to, supposedly, wait for the pharma-cology to fail.

The interesting thing is that, given that the NIMH has declared pharmacology and the biochemical modality of psychiatry as outdated, by default only ‘surgical lesion of the brain’ remains as the ‘only’ hope sanctioned by the new gurus of psychiatric surgery. And they do it two at a time.

Why have one procedure when you can have two at the same time for 4x the price? Sure, they’ll leave your kid like a zombie, but who cares as long as he stops being a nuisance. It can also be used to make you or your parent or a spouse less aggressive and/or argumentative. Those were the same excuses for using lobotomy in children and adults in the past, we are having them back again.

One of the ‘new’ diagnoses in the new DSM -5 that helps set the operating table includes:

Disruptive Mood Dysregulation Disorder. This is the controversial new designation for children showing persistent foul temper punctuated by bursts of rage. When first proposed, it was widely derided as an attempt to medicalize “toddler tantrums” (even though the criteria clearly stated it was for children older than 5.)

They are getting your hospital bed ready.

These are the most popular new lobotomies being practice today.

In the last decade, brain surgeons have reported encouraging results in their efforts to alleviate severe obsessive-compulsive disorder. Different operations can be is to interrupt overactive neural activity between the frontal cortex and structures deep in the brain. They include:

The above is  From http://www.mindfully.org/Health/2003/Brain-Surgery-OCD-Behavior4aug03.htm

“Bilateral Cingulotomy is a form of psychosurgery, introduced in 1948 as an alternative to lobotomy. Today it is mainly used in the treatment of depression and obsessive-compulsive disorder. In the early years of the twenty-first century it was used in Russia to treat addiction.”

Hoarders take far longer to make up their minds and show more activity in the anterior cingulate cortex,”

The aim of the operation is to disconnect the orbitofrontal cortex and thalamic nuclei.

“Background and purpose: Psychosurgery, such as anterior capsulotomy, is a therapeutic option for treatment-resistant obsessive-compulsive disorder (OCD). Methods: Twenty-four patients were surgically treated in our centre between 1997 and 2009, 19 of whom were included in this study.” http://jnnp.bmj.com/content/84/11/1208.abstract

…targets the amygdala, as a treatment for aggression.

Deep brain stimulation (DBS): It’s an implant. This is an interesting Times mags description of the procedure.

But this is the one you will seldom read about:

In spite of its clinical success, DBS technology and the associated surgical procedure have several limitations. For example, clinicians lack tools that combine anatomical, physiological, electrical, and behavioral data to optimize electrode placement and stimulator programming. Patients endure significant discomfort during implantation due to the use of rigidly fixed stereotactic frames.

As in the past, we are been sold these procedures as already good for use. In the next post: the lies that they tell you about psychosurgery.